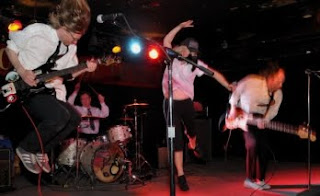 Another remarkable night for Monteforte at the Horseshoe last Friday, and to think it was all because of last year's show. Brad From Halifax ("I recommend being in a band in your '40's - it really breaks up the week.") explained that show was a "showcase" for all sorts of music bigwigs, and the band impressed them so much, they won the chance to return this very night. The MF'ers showed their appreciation by giving all they could give and probably some more. Among the highlights: each set kicked off with a Loverboy song ("The Kid Is Hot Tonight" and "Hot Girls In Love" respectively), a delightful "Love Will Keep Us Together"; their continuing support of their hearing-impaired fans (it makes sense many of MF's biggest fans can't really hear them...) by playing "The Most Beautiful Girl In the World" with sign-language by Mrs. Sleaze, mother of The Most Famous Signing Baby On the Internet; a new Most Recent Song in the form of Clay Aiken's "Invisible" and a stellar version of Doucette's "Mama Let Him Play" with an extended solo by The Clapper. Simply remarkable. MP3s of highlights are on the way, but for now, enjoy this little taste of the action on youtube! (Thanks to Dave Cyr for the photo here and the new ones on the MF page. If you're so enclined, he has a whole set on Facebook.)

In other news, noted Vikki Sleaze doppleganger Moe Berg will be part of this year's Summer Writing School at the University of Toronto, which involves 11 professionals from a wide range of writing disciplines conducting intense workshops the week of July 7th. Although Moe was invited through his literary connections, he'll of course be teaching songwriting, with some guests to help out. For more details, check out the site for the School of Continuing Studies here.
Posted by Valerie at 9:41 PM No comments: