And now to catch up with Kris and Dee, who have had a pretty amazing summer so far. After being part of the Save Our Prison Farms rally with none other than Margaret Atwood and doing a lot of writing on a vacation in Newfoundland, their gig schedule just keeps rolling on.

Tonight (yes, sorry for the late notice), they'll be playing at the Music Market Cafe in Napanee at around 9:20pm (only a $5 cover and two great acts preceding). Then next weekend, they're at the Raise the Roof Women's Music Festival in the Kingston area on Sunday afternoon at 1:30.

Since the new embed function on YouTube is being annoying right now, head over there to check out Kris and Dee performing three original songs at the recent Homegrown Music Festival: "Mars", "Presence of Me" and "Polar Bears".
Posted by Valerie at 10:25 AM No comments: 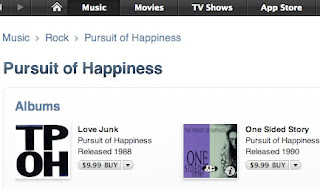 Okay, so we'll be doing some catching up on things for the next short while, starting with a funny status message Moe put on Facebook: "Out of nowhere, the first two TPOH records appeared in the American iTunes store. A bit late but thanks Capitol Records."

Indeed, better late than never, and so folks in the U.S.A. can pick up Love Junk and the crazy-rare One-Sided Story here at their iTunes Store.

Since every country/region has to have its own separate iTunes Store (an annoyance to many people), a reminder (as suggested in the sidebar) that TPOH is also available to some extent in the iTunes Stores of Canada, the U.K., Ireland and Australia. But don't bother much with the biography, which mentions "drummer Dave Gilburg" and "Bran Barker on bass". :-)
Posted by Valerie at 6:48 PM No comments: