So we're back after a year with happy reunion news. TPOH (Moe, Dave, Kris, Brad and Renée) will be playing the Q107 Jingle Ball December 13 in at The Phoenix in Toronto. This is the first reunion in ages to actually be open to the public (most in the last few years have been private or corporate affairs) and the only one for ages besides the Stampede gig to be pretty much a full-length set - reportedly slated to be about 50 minutes.

Holy crap, huh? So check the details here and we'll see you there!
Posted by Valerie at 2:46 PM No comments:

A Moe Berg Song About YOU?

We've mentioned before the great work Moe's wife Laura has been doing with her company My Smart Hands, which teaches babies and other kids to communicate through sign language to help their early communication skills. Her YouTube videos with daughter Fireese (with musical help from Moe) have views in the millions. Now she wants to take her video production to the next level, and your help can mean some pretty sweet perks for TPOH fans.

Laura has an Indie GoGo campaign going to raise money for a new series of instructional videos. While the many perks for contributing include exclusive song and video downloads and a chance to have your child in one of the new videos; other big Moe-related perks include copies of his excellent short-story book The Green Room, advice on a submitted demo song of yours...and for the top perk, a Moe Berg song with your name in it!

What really matters, though, is that the Bergs can get bigger and better taking their message of fun communication and literacy to more and more families around the world. So whatever you can give will no doubt be appreciated. So donate now!

So I forgot to post video of the gang reuniting again to play two songs to honour their friend Graham Henderson at the Canadian Music and Broadcast Industry Awards during Canadian Music Week back in March? Um...yeah. Here you go.

We could blather on and on like we used to about how brilliant Monteforte's (alleged) final show was Saturday night / Sunday morning. But the kids these days have those fancy video cameras in their phones and such. So let's (Amit and I, so far) show some of it to you!

Also, Mrs. Berg has photos on her Facebook here, and this guy has fancy watermarked photos here. Thanks, everybody!!!
Posted by Valerie at 4:52 PM No comments:

Back in September, Mrs. Berg released her book The Baby Signing Bible with a big party at The Rivoli featuring the ridiculously mighty Monteforte in a rare reunion. While the guys had the idea it would be their final gig, mercurial frontwoman Roxy had other ideas. She seemed to be the only member of the legendary band with any sense of history whatsoever.

Allegedly with a publisher's offer for a salacious tell-all on the table that made her bandmates blanch (the offer, not the table - it's a nice table), she demanded that Monteforte do One More Show: at the Legendary Horseshoe Tavern, bigger than any MF show evah, possibly involving fire and something she wears on her head. Not wanting certain pictures and stories to come out, the boys agreed to give everyone some closure.

And so it happened that after 20 damn years, Monteforte will rock the living crap out of you with music you'd never admit you like because you're a pussy for ONE MORE SHOW. The band who invented post-irony play the Horseshoe in Toronto Saturday February 16 with sets at 11pm-ish and 12:30am-ish, with opening band Healthy Libido playing at 10pm. Admission for history is 10 pathetic bucks. Be there, because there will be no tomorrow. (Although tomorrow will be Sunday, but it won't really be tomorrow...you know what we mean, right? Okay.)
Posted by Valerie at 8:58 PM No comments:

Reunion @ the Stampede? What?

Yes, it's been awhile again, but this kind of snuck up on us and smacked us in back of the head. The Pursuit of Happiness played their first gig in about six years a couple days ago at a private corporate event associated with the Calgary Stampede. Part of the contract, evidently, was staying mum about it until it happened, but now it has happened, there's plenty to share. All of it so far comes from Kris, documenting a whirlwind 48 hours there and back (she had the furthest to travel from Kingston, while Renée had the least distance, still living in Alberta) in a Facebook photo album and a performance video of "Beautiful White" and "Ten Fingers".

But wait, there's more. Kris sent along three other live videos to share with you. You can rack up the YouTube playlist, but here's a sample. Enjoy! And a big thanks to Moe and Kris for getting us caught up.

Kris and Dee still here, and with their album! 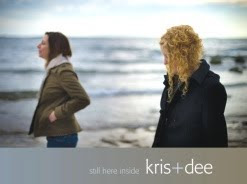 Doesn't seem like so long ago we were talking about Kris and Dee working on their first album, and now we have a cover, release date and party! Still Here Inside will drop independently May 5, available at Zap Records in Kingston Ontario and online at Kris and Dee's own new site.

A release show/party happens at the Grad Club in Kingston on Friday May 13th with special guest Sticky Henderson. The fun starts at 9pm with just 5 bucks for admission. But for now, you can get a preview of the album with a new track each day on their Facebook page and myspace page. So take a listen and post your best wishes for Abbott and McNeil!
Posted by Valerie at 9:43 AM 2 comments: